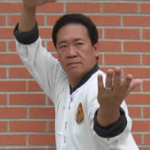 Master Jason Tsou (鄒家驤) was born in Taiwan, Republic of China, in 1949. He began his martial arts studies more than 50 years ago when at the age of eleven he learned Mei Hwa Chang Quan (Plum Blossom Long Fist Kung Fu) from Grandmaster Wu Ti-Pang. This was his first exposure to a Northern Chinese Kung Fu style. With that foundation, Master Tsou went on to study with the following masters and learned their respective styles:

Master Tsou won the Singles championship title at the 1971 National Kung Fu tournament held in Taipei. He also served as the chief martial arts instructor for the Taiwan Air Force, Fourth Division. Master Tsou immigrated to the U.S. in 1974 to pursue further graduate study at the University of Massachusetts-Dartmouth where he received a second Master’s Degree in Chemistry. His first Master’s degree was in Engineering from Feng Chia University in Taiwan.
During his college years in Taiwan, Master Tsou was chairman of his kung Fu club. Upon moving to Massachusetts, he founded the kung fu club at UMass and also served as a guest instructor at Harvard and MIT kung Fu club(s). During a time of civil unrest, Master Tsou was invited by the Massachusetts State Police to teach State Troopers riot control techniques.

In 1977, Master Tsou moved to Los Angeles, California and co-founded a kung Fu club at UCLA. By 1990 what had begun as a hobby became the Jason Tsou Kung Fu Academy
(龍驤武壇) with the opening of his studio in San Gabriel. For the better part of the last decade of the 20th century Master Tsou ran his studio as well as his engineering practice on a full time basis. In 1998 he closed the studio and returned to the park located at 400 S Casuda Canyon where he had taught between 1978 and 1990 and where he continues to teach until this day.

Master Tsou has become one of the premier instructors of traditional Chinese martial arts in the U.S. He has been featured in the following books and periodicals: Inside Kung-Fu, The Complete Guide to Kung Fu Fighting Styles, Karate and Kung Fu Illustrated, Black Belt, Fighting Stars, The Pakua Journal, and Tai Chi Magazine to mention a few.

In order to showcase traditional Chinese weapons fighting, Master Tsou formed an organization called “Circle of Arms”. He has also given his support to the promotion of Chinese sword fighting for sport (Jianshu) at major Chinese martial arts tournaments. He has functioned as chief judge for both Jianshu, Extreme Push hands, as well as form competition at Nick Scrima’s International Chinese Martial Arts Championships.
Master Tsou was also invited by the Department of World Cultures and Arts at UCLA to teach a course on Tai Chi Chuan in 2007 and continues to do so. He teaches Tai Chi Chuan, Jianshu (Chinese sword fighting) and Kung Fu as a guest lecturer of the kinesiology department at California State University, Long Beach. He also attended Bryman College in his spare time to learn western message techniques and obtain a certification from the State of California.

In 2005 Jason Tsou retired as full time from manager of his engineering company. Since then, he has had more time to work with his senior student Art Schonfeld (a retired lawyer) on many projects. These include instructional DVDs and books. His DVDs include
Bagua Chi Kung- the secret’s of the dragon, Tai chi- Chi kung-harmony in transition-, Chin na: Taking control of energy (with accompanying book); The Random Circles-Tai Chi Push Hands, and The Complete Jian Shu: Chinese combat sword for sport (with accompanying book). Master Tsou has also published a book on Taiji — Tsou and Schonfeld (2008), Yang Taiji: The Untold Story.
In the summer of 2017, Jason Tsou was elected as the president of Traditional Chinese Martial Arts Federation (TCMAF). He has been continuously on the mission of promoting Traditional Kung Fu and unifying Kung Fu communities in USA.
Acknowledged worldwide for his skill and achievements in traditional Chinese martial arts, In 2007 Sifu Tsou was listed in the mainland government’s official publication of “Who’s Who in Chinese Martial Arts.” 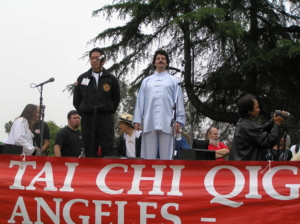 Grandmaster Jason Tsou was a member of the World

TCMAF Master Tsou is the Chariman and Master Marquez is a board member.