Bagua Zhang is an ancient internal martial art generally characterized by a preference for open-hand fighting, circular movements, and evasive footwork. Its foundation is built upon the yin and yang circle. Its complexity is to control your opponent while doing circles around them. Not knowing which angle and direction the person is coming in. The founder Dong Hai Chuan who gave birth to Bagua is the father buy paper but know body really knows who started the art. It has been passed down from Master to student and is here in the Shaolin Temple School. The art took off when Grandmaster Dong Hai Chuan competed and not just one but made a change in the Martial Art world. The idea not of linear fighting and forms was a big change to the world.

Bagua Zhang is the most recently developed of the three main Chinese internal martial arts, the other two being Taiji and Hsing Yi. It originated with Dong Hai Chuan who began demonstrating and teaching it in the mid 1860’s in Beijing. Bagua Zhang quickly established its reputation as a very effective fighting system. At the time Dong worked as a bodyguard and later as a tax collector for Prince Su at the Imperial Court. Using Bagua Zhang he was undefeated in fights during this period until his death in 1882. Bagua Zhang literally means eight trigram palm and the structure of the system is based on Taoist philosophy. Dong is reputed to have learned the system from an old Taoist in the mountains, but its exact origin remains a mystery.

Dong’s first and by far his longest serving student was Yin Fu (1842 – 1909). Yin started studying with Dong in the mid 1860’s and is believed to be the only student to have learnt the complete system besides Cheng Ting Hua. The style and flavor of Bagua that Yin Fu began to teach became known as Yin Style Bagua.

Dong’s second and longest serving student was Cheng Ting Hua (1848 – 1900). Cheng started studying with Dong in the mid 1876 and is believed to be the only student to have learnt the complete system besides Yin Fu. The style and flavor of Bagua that Cheng Ting Hua began to teach became known as Cheng Style Bagua.

Hao Xinlian is living in Gansu China teaching many colleges and Universities in China. He has written many books about Bagua Zhang and other martial arts that he teaches. He has won Lion prize in China in his province 5 years in a row. This consists of knowledge of all areas of martial arts, calligraphy and the healing arts. He is government taught and has the seal of head coach from the Chinese Government. He teaches a variety of Internal and External Kung Fu. He has written books on every subject he teaches. He has had the honor from learning from the best master in each field he teaches. He has had the opportunity to learn the whole Gin Yee and Cheng Baguazhang. Master Hao started teaching Shifu Marquez in 1993 in both of these styles and now has certified Shifu Marquez in both of these. Master Kam Yuen from Grandmaster Wong Jack Man was training Shifu Marquez in Yin Bagua Zhang besides Hsing Yi and Wang Style Taiji. Shifu Marquez was a sponsor of the Jui Long Baguazhang for many years under Master Biff Painter but does not teach this art. 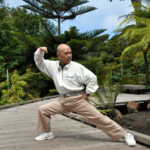 The standing exercises, which include static and moving exercises, are a key element in Yin style bagua and are used to build up qi, physical strength and flexibility.

Circle walking is perhaps the single most important area but sometimes the least practiced! It comprises walking in a circle holding a static posture from the animal system concerned and then using a simple routine or strike to periodically change direction. It is an important method of building up qi and learning relaxation and rooting.

Routines involve practicing a sequence of strikes (typically seven strikes) whilst walking the circle. Also included in this area are the practical fighting applications of these strikes. Practicing the strikes whilst walking in a circle helps the practitioner to develop the ability to change his line of attack relative to an opponent.

Power training involves repetitive practice generally of single strikes to build up power in the strikes. The power training is done using stationary drilling, single step drilling, two step drilling and three step drilling. Particular emphasis is placed on developing a relaxed connected structure in the body, rooting to the ground and on optimizing the body mechanics so that the power comes from the whole body and not just the arms.