Traditional Baguazhang as it is widely practiced in China today is reputed to have been created by a man named Dong, Hai Chuan . There are many stories about the creation of Baguazhang. His teacher was Master Dong Mei Lin and he taught Shifu Dong the fundamentals of circle walking. Historical facts are few and far between, due in large part to an aura of mystery that Master Dong himself intentionally cultivated. We do know that Dong was originally born and raised in Wen An, Hebei province and later moved to Beijing, where he taught the palace guards a new and unique martial art style that he claimed he had learned from “an old Taoist man” in the mountains. In time he told others the name of his new method of martial art was called Baguazhang (Pa Kua Ch’ang) which meant eight shaped palm boxing.

The following are a few of the stories told by or about Dong, Hai Chuan and the founding of his system of Baguazhang. Historians still argue over which if any of these stories is true.

Dong told some students that he wandered into the mountains near Beijing and encountered a dwarf. This dwarf allegedly led Dong to a monk named Bi, Deng-Xia (Man Without Shadow Under the Lamp) who was the number one student of the actual founder of Baguazhang. Research has shown that the validity of this version is open to doubt.

Another story claims that Dong, Hai Chuan created Baguazhang from his life experiences. He trained extensively in martial arts for much of his youth in his home, Wen An in Hebei province. At the age of 40 he was attacked and almost killed on a road. Monks reputedly of the Taoist Long-Men sect (Dragon door Taoists) found him and he was said to have been instructed in a healing method of exercise used by these Taoist monks who practiced a meditative method of walking in circles and chanting mantras. After he recovered he traveled to Beijing where he became a servant in the Emperor’s kitchen. As a waiter he had to balance great dishes on each hand and in so doing he was inspired to create evasive maneuvers that may have influenced future Baguazhang movements. It is most likely that he combined various elements – his years of training in Wen An, the circle walking of the Taoists, the footwork and palm changes in the kitchen – to create his own Baguazhang forms.

As the story goes the Emperor entertained his guests to a great feast. The palatial grounds were crowded with people at that time and entrance and exit was impossible. Dong, Hai Chuan , however, could maneuver himself in and out of the palace grounds by leaping on and off the courtyard walls while balancing trays in each hand. The Emperor was very impressed by Dong’s agility and questioned him. It was then that Dong first revealed himself to be a Master of the method he called Baguazhang, and was obliged to give a display of his skill. His performance was so unique that the Emperor made Dong the martial arts teacher of the palace guards. After this, Dong’s fame spread throughout China.

Dong, Hai Chuan rarely discussed the origin of the art with his pupils. When pressed he told different stories about how he came to learn Baguazhang. It is very interesting in that he was not willing to discuss his lineage in honest terms. Yet today so many students and teachers of his Baguazhang want desperately to trace their lineage back to a man who while he may have been a martial genius was possibly a criminal and was no doubt dishonest in revealing the truth origins of his martial arts.

One incident points to this shifty nature seen in Master Dong. It occurred after a visit paid him by Song, Wei-Yi. Dong told some people that Song’s teacher and his teacher were fellow students. As Song was a master swordsman, Dong’s pupils thought that there was a historical connection between the two schools. It was later learned from certain sources that Dong in all likelihood had formerly been a notorious bandit with a price on his head. To escape the authorities, he may have become a Taoist monk, but was later learned he was expelled from the monastery for intemperance.

It is said that perhaps the Long Men Taoist monks with whom he claimed to have studied were disappointed in Dong as he was illiterate and could only learn the basic circle walking methods and could not fully comprehend their practice based on the very complicated book the Yijing.

Perhaps as a last resort, he ended up as a servant in the Emperor’s palace. One of the best places to hide from the police is right in front of the station house. Another probable false hood came when Dong claimed to be a eunuch. Men who served in the imperial palace were required to become eunuchs in most cases. Dong, Hai Chuan never dispelled rumors that he was a eunuch. However, it is quite unlikely, as he was well over twenty when appointed teacher of the palace guards, and the surgery requiring not just the removal of the testicles but also the penis would have been too painful for a man of this age to bear. It is believed he deceived the royal physicians into thinking he had the operation. It is likely that Dong being a eunuch was a fabrication to put others in awe of Dong’s sacrifice for the Baguazhang art.

One Art Many Methods

One of the reasons for so much confusion concerning the original methods of Dong, Hai Chuan ‘s Baguazhang is that he mostly only accepted men who were already superior martial artists. He then adapted his basic principles of circle walking and combative methods to their particular natures and styles of boxing.

This created superior martial artists who developed unique versions of Dong’s Baguazhang. It also gave rise to disputes and controversies among the followers of his original student’s years late after his death as to which method was more pure or correct. These petty squabbles have continued into modern times.

The real answer is that each original student was taught according to his abilities and therefore no one is right or wrong within their own methods. For this reason Baguazhang has many branches, variations and styles all linked by the idea of circle walking none of which are exactly as Master Dong practiced the art. His methods were designed for his personality and abilities in the same manner as he instructed his student. This makes the practice of Dong, Hai Chuan ‘s art a very personalized method by each individual who learns the art.

Dong, Hai Chuan died at the age of 84. This was the sixth year of the reign of Emperor Guang Xu (1875-1908). Dong was buried a mile away from the East Gate of Beijing, and ever since, his tomb has become a Mecca for all practitioners of Baguazhang. 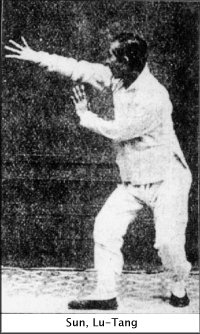 Baguazhang as it was taught in the palace was not linked to the Yijing. The connection came many years later in the Dong system of Baguazhang when Sun, Lu-Tang a student of master Chen, Ting Hua one of Dong’s top Baguazhang students began to study Taoism and created fresh connections of the Yijing and Baguazhang.
Sun, Lu-Tang was a martial art prodigy who attained great skill in Taijiquan, Xingyiquan and Baguazhang. His Baguazhang instructor Cheng, Ting Hua after showing him the method told him it would be good to go to Sichuan to study. So in 1894 Sun, Lu-Tang set off for Sichuan province to study Taoism and Taoist immortality exercises. While in Sichuan he met a monk called Zhi Zhen with whom he began a study of Taoism and the Yijing. Taoist Qi exercises and the depth of the Yijing profoundly influenced the development and evolution of Sun’s Baguazhang methods.

In 1916 after many years of research Sun, Lu-Tang published a book, The study of Ba Gua Boxing  that details much of his newly acquired knowledge of Taoism and the Yijing as applied to his method of Baguazhang. While this merger of the martial art with the philosophical is not the same method practiced by the Long-Men Taoists it is an attempt to explain the inner workings of the martial and health methods of Sun’s Baguazhang using the images and associations of the Yijing. The art had in some ways come full circle with Sun, Lu-Tang’s method as once again from it’s Taoist origins Baguazhang became associated although with a new interpretation with the Chinese Book of Changes.

While there is no accurate record it is believed that Nine Dragon Baguazhang as practiced by Li, Ching-Yuen and later the Li family of Sichuan province may be associated more closely with the circle walking and Yijing images used by the Long-Men Taoists. The applications of the Yijing principles in the Nine Dragon systems and in Sun, Lu-Tang’s method are certainly different from each other in numerous aspects. While they share the Yijing in common Master Sun sought to explain the parts of the body and movements philosophical concepts using the Yijing.

The Jiulong system uses the Gua symbols in it’s martial art more as inspirational mental images to help a student find the ability to move like the names of each Gua as in flowing like water, bursting like fire, whirling like wind or vibrating like thunder. In the health, Jiankang Qigong methods Nine Dragon Baguazhang makes use of the correspondences found in Feng Shui from the compass school and from ancient Taoist associations of Yijing. 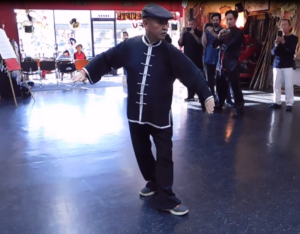 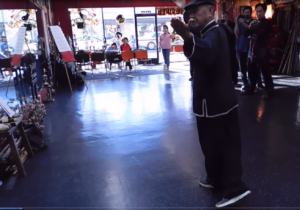 Even though the two methods differ there is no reason to dispute who is right or who is wrong. Each of these two systems is linked to the Yijing by the knowledge applied from two highly intelligent scholars of Taoism and Yijing cosmology. Both Sun’s and Li’s approaches can be correct as they are merely interpretations of images used to create mind / body energy be it Qi or Jin in the students who practice the arts. In the final analysis no matter if one ascribes to the non-Yijing connection of Dong, Hai-Chuan or the Sun, Lu-Tang Yijing connection or Li, Ching Yuen’s method of using the Yijing and Baguazhang as mental images for health or martial empowerment it is still Baguazhang. Even the modern Wushu students who only learn forms devoid of application or Qigong benefit are doing Baguazhang. We who practice Baguazhang by whatever the system name all walk the circle and we honor the masters from the Taoists who started it to Dong, Hai Chuan and his students who came before us for showing us this fascinating many faceted art of constant change.