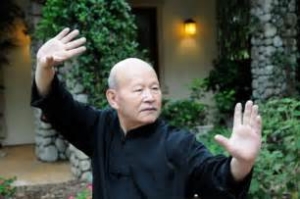 Master Zhou Ting Jue is a Qi Gong, Tai Chi and Kung Fu Grand Master who has been featured on numerous television programs, such as “Ripley’s Believe It Or Not,” “That’s Incredible,” and was recently showcased on The History Channel’s hit show “Stan Lee’s Superhumans” and “Man Vs. Weird,” in recognition of his amazing abilities–which have been verified by ample scientific, diagnostic and medical research documentation.

Master Zhou is an extraordinary living treasure who has worked with, taught and treated everyone from HH the Dalai Lama and the LA Lakers, to Olympians, spiritual masters, artists, celebrities, leaders and dignitaries, world-wide. He is often called “The Healer’s Healer.”

President of the Tian-Jue Non-Profit Qi Gong Foundation and founder of the China US Wu Dang Qi Gong Association, Grand Master Zhou Ting-Jue was born in 1934 in mainland China, where he has been called a “Jewel of the Nation.” He coached the Chinese Martial Arts Olympic Team for several years and is 18th Generation Wu Dang Lineage. At the age of seven, he began learning martial arts and Traditional Chinese Medicine under the guidance of his uncle, a Taoist priest. He often secluded himself at Wu Dang Mountain for advanced studies. There, he cultivated the discipline of Qi Gong and developed a profound understanding of the true meaning and potentials of Qi and its relationship to life and the universe, while developing his own potential to the highest level of mastery. His mentors included many famous Chinese Qi Gong, Tai Chi and Kung Fu masters, who transmitted to him their vast wisdom and mastery of these ancient arts. From this vast depth of experience, he created his own intricate system and style of Qi Gong, Tian Jue–“Heaven and Earth”–Qi Gong.

Master Zhou attributes his unique ability to emit intense heat from his palms, to the energy flow, or Qi, that is naturally cultivated and developed by more than 70 years of Qi Gong practice. Incorporating this, his therapeutic treatments have been known to provide relief to thousands of people, who travel the world to be treated by him and to study with him.

It is the opportunity of a lifetime and a profound, humbling honor to study with and be treated by this true Grandmaster.

In 1991, Master Zhou was invited to the International Southern California Hai Hua Cup Martial Arts Tournament as a competitor, where, at 60 years of age–he beat out all other competitors and won the Grand Prize Championship two consecutive years in a row. Subsequently, the tournament committee, recognizing his expertise, appointed him as a consultant and judge.

Has been given the Key to the City of Los Angeles and recognized by the California Secretary of State for Outstanding Service to Humanity. 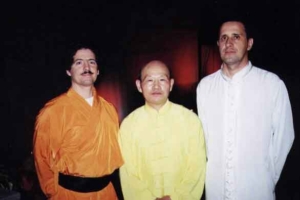 with Master Marquez in Cardoba Spain. 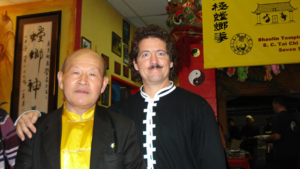 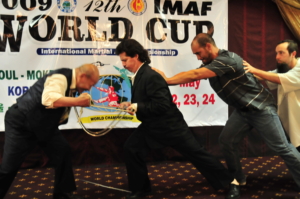 and his assistant here he is pushing 2 metal bars into his throat. 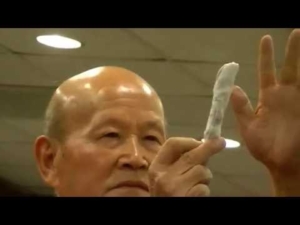 GM Zhou has been on TV shows as Ripley Believe It or Not, That’s Incredible, Real People, Stan Lee Superhumans, Man vs Weird.

Video of GM Zhou breaking bricks on Master Marquez head with a sledgehammer at the Shaolin Temple school.