Chen Wang Ting (1580–1660) was a Ming Dynasty general who founded Chen-style T’ai Chi Ch’uan, one of the five major styles of the popular Chinese martial art. Sometimes called Chen Wang Ting or Zouting, he devised the Chen family-style of T’ai Chi Ch’uan in his home of Chenjiagou, Wenxian county, Henan province after he retired there following the fall of the Ming Dynasty.

Military career
During the Ming Dynasty, Chen served as Commander of the Wen County Garrison, and was distinguished for his protection of merchant caravan (travelers) caravans in Henan and Shandong. Chen style Taijiquan after the Ming Dynasty ended and the reign of the Qing Dynasty began, Chen’s military career was effectively over, and he retired to the family settlement.

Two widely documented theories of Chen’s martial arts work exist: the first is that he learnt his arts from Wang Zongyue and the Wudangquan|Wudang tradition developed by Zhang San Feng. The second theory — the one accepted by the Chen family, and supported by historical evidence. Ignorance, Legend and Taijiquan. Journal of the Chen Style Taijiquan Research Association of Hawaii is that he combined his previous military experience and the theories of Jingluo and Daoyin with the popular teachings of Qi Jiguang. Chen Taiji 38 Form and Applications. His complete work contained five smaller sets of forms, a 108-move Long Fist routine, and a Chen-style T’ai Chi Ch’uan Cannon Fist routine. Chen is also credited with the invention of the first push hands exercises. Chen also practiced a few Shaolin forms, and some historians postulate that Shaolin Monastery Shaolin arts also had a significant influence on his T’ai Chi, though none of the Taoist influences on Chen family T’ai Chi exist in the Shaolin tradition. The Complete Book of Tai Chi Chuan: A Comprehensive Guide to the Principles and Practice.

Chen Wang Ting’s next well-known successor was the 14th generation Chen Chang Xing (1771–1853), who was the direct teacher of the founder of Yang-style Tai Chi Chuan: Yang Lu Chan.

In the Shaolin Temple we teach both the Chen & Yang styles of Tai Chi Chuan. 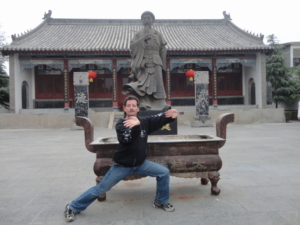 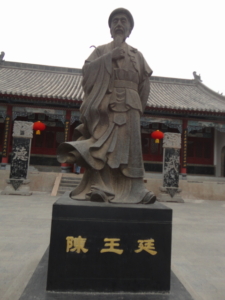 Master Marquez at the Chenjiagou Village in front of the statue Grandmaster Chen Wang Ting.