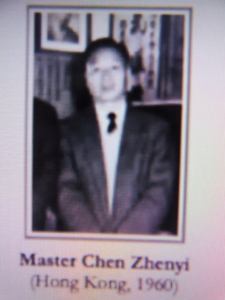 Chen Zhenyi began his studies under Lo Kwon Yuk in Shanghai at the Jing Wu or Ching Mo school. Chen graduated under Master Lo Kwan Yuk in Shanghai and became Lo’s room-mate for many years. He moved to the south with  Master Lo and helped him set up his Kowloon school. Chen Zhenyi was actually the first person to teach such people as Huang Han Xun (Wong Hon Fun) and Zhao Zhi Ming (Chiu Chi Man). This makes Chen Zhenyi the senior brother to all of Lo’s students from the south. This places Chen as a Lo Kwon Yuk’s senior disciple.
Chen set up a small class in Kowloon and taught Seven Stars Praying Mantis in an old-fashioned way. He was frequented by his Shifu Lo Kwon Yuk, until Lo moved back to Shangdong.
Also, people from Chen’s lineage still practice sets that were not taught to later students of Lo — including a Spring and Autumn Kwan Dao form not known to other branches of Seven Stars (different from the Da Kwan Dao set).
There is little difference between Chen Zhenyi’s students like Kam Yuen and Huang Han Xun’s in the way of forms. For example, forms like Beng Bu, Shi Ba Sou, Cha Chui, Bai Yuan Tou Tao, and others appear to be nearly identical except for the pacing of the forms. Huang Han Xun’s forms phase each movement very distinctly in each expression of Jing where it seems that Chun Chin Yee’s students do not space them quite as far apart. 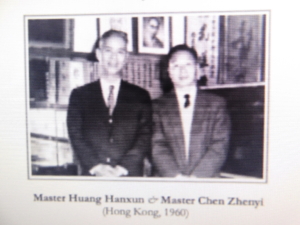