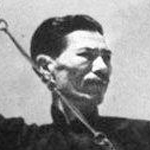 Nicknamed Bamboo Creek.
Born in Loo Wan Village, Sha Ho Town, Yick County, Shantung Province in 1900. Shifu Chiu Chuk Kai started his martial art training in a Buddhist temple in Shantung at the age of 10, studying Tai Zu Quan (Great ancestor Boxing). After his master died he came across the training sessions of the Tai Ji Tang Lang masters Shifu Yam Fung Sui and his Gung Fu brother Shifu Chi Shou Jin who ran a security Service. Having no money to afford lessons Shifu Chiu Chuk Kai would watch the training class daily in all kinds of weather never missing a day. After a while the two masters noticed him and invited him to join the class. After explaining he was unable to pay, the masters who were so impressed with his dedication offered to instruct him anyway. Shifu Chiu Chuk Kai grateful for the opportunity said that he would work for the Service as a guard in exchange for his classes where he worked, studied and lived for around seven years until he was 18. His job was to help guard gold shipments against the bandits in his native Shantung during the 1920’s. During this time 100 bandits ambushed Shifu Chiu Chuk Kai caravan and he encountered one of the most notorious bandits of the time.

After a fierce battle, which almost became a draw Shifu Chiu Chuk Kai killed the bandit. Thereby gaining a wide spread reputation a great fighter, and became known by the nickname of Chuk Kai, which means Bamboo Creek (the place the famous battle took place). In the ’30s Shifu Chiu Chuk Kai started his own business with three partners exporting silk to Guang Zhou. Therefore, he left Shantung province and he moved to the south of China where he kept teaching his boxing style. Shifu Chiu Chuk Kai set up schools in Macao and Guang Zhou until World War II. After the World War II Shifu Chiu Chuk Kai moved to Vietnam (first to North Vietnam and later to South Vietnam). He introduced the Tai Ji Tang Lang Quan style to military officers in South Vietnam, where he sent one of his personally taught students to be the bodyguard for the South Vietnamese President. While teaching in Vietnam in the 50’s Shifu Chiu Chuk Kai had over 60.000 students distributed in 32 schools. American soldiers learned most of the Tai Ji Tang Lang presently seen in the US in these schools during the Vietnam War. 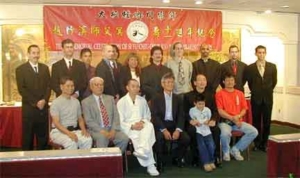 In San Francisco at the USA Chiu Chuk Kai Banquet.