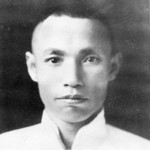 Grandmaster Ku Yu Cheung is widely regarded as one of the most famous and accomplished masters of the late 20th century, he was especially famous for his iron palm/iron body mastery.

He also killed a horse once with the invincible Iron Palm Skill! This is a very famous story that actually happened. Another famous Master of the Eagle Claw school, Master Lau Fat-Man, was there to witness the event in 1928, in Kuangtung Province, Southern China (Canton). 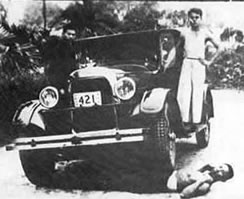 As the story goes, a Russian circus strongman had a wild Siberian horse (probably a “prezywlaski” breed) that was trained to fight, and the man was challenging all comers to accept the match between anyone who could “tame”, or beat the horse. There was a reward, of course, but that was not Master Ku’s motivation, however. The reason he accepted the challenge was because other masters and their students were being beat up by the horse quite badly, acquiring some serious injuries. Ku wanted to end the shame of his colleagues, so he accepted the challenge himself. When Ku got into the ring with the horse, he got kicked several times, but he received no injuries at all, due to his internal iron body skill (gold bell, i.e. iron shirt). Ku then managed to slap the horse with one palm slap. The horse gave out a loud whinny and dropped dead with blood coming out of the eyes, ears, nose, and mouth and died instantly. An autopsy was performed and they found out that the horse had died of internal massive bleeding, due to ruptured blood vessels and organs, yet there was no sign or external mark of any injury on the outside of the horse’s body.

Grandmaster Ku Yu Cheung breaking a stack of 12 bricks with one slap.

The chi created during Iron Palm exercises is a tool, and can be used for medical or martial purposes. For those who are familiar with acupressure and Qigong, this art can be used for healing as well.

Master Ku was also appointed as a one-star General. He taught the army, as well as at the Government Martial Arts Association, the famous old “Nan Jing Kuo Su Guan”. He, along with five hundred other masters were invited by the Kuo Su Guan to their first annual tournament. Only seventeen participants were left out of three hundred who had fought, who were selected to be teachers at the Kuo Su Guan. 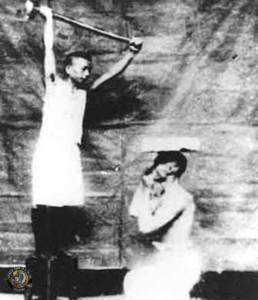 Master Ku was also called one of the “Five Northern Tigers”, who went South, as he and four other Masters were sent by the Kuo Su Guan to set up a new Kuo Su Guan in Canton. While Master Ku was in Kuangtung, he had a neighbor friend who was a Choy Li Fut Master. The two of them got along well. Tam Salm had a challenge match with Ku and it ended in a draw. The two of them agreed to teach each other’s styles. So, Master Tam Salm learned Master Ku’s secret skill and passed them down to Master Wong. Master Ku, while in the Military, was sent to a remote area and he became ill and died in 1934. 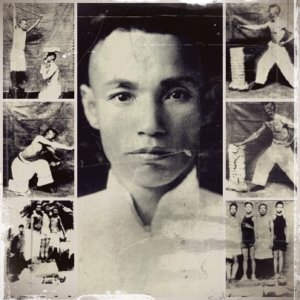