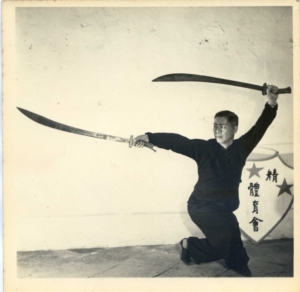 He was born in the Shunde country (Guangdong province), Chen Zhenyi and Wong Hon Fun was the most famous of Lo Kwon Yuk’s students. Wong Hon Fan (mandarin: Huang Han Xun), was known in Hong Kong as the “Mantis King.”
He joined the Hong Kong Ching Wu Association in 1932 and began his instruction under Lo Kwon Yuk. At the age of twenty he was encouraged by Lo Kwon Yuk to establish a school in Macau. He then went to Hankou to teach at the Hankou Ching Wu Association branch. Huang Han Xun was asked by Lo Kwon Yuk (who was teaching at the Hong Kong Ching Wu) to go to the Ching Wu at Wuhan, Szechaun province to teach at the Ching Wu there. The facts are that in his over 30 books and dozens of articles written or co-authored by Huang Han Xun, he never used the term “Seven Star” as the name of his style but he used “Northern Mantis”. Huang Han Xun lineage followers do not share the view that he was exempted from the use of any name. They believe, he was using the term “Northern Praying Mantis” because it more fully represented the true make up of Praying Mantis system.
Huang Han Xun left his legacy to a number of senior students. He gave only 20 people permission to teach and one of them was Brendan Lai. Permission consisted of his signing a banner. His measure of who was ready varied apparently, adapted to each student. It is agreed by all though that those licensed were representative of the best of his followers though not necessarily all knew the same things or were all of the best of his students. Shifu Brendan Lai was the last to receive such an honor though there were many other students who did teach without any cries of “foul” from the Huang Han Xun Mantis community. In fact there was, in some cases, great support for students teaching despite not having the “license” from Huang Han Xun. Apparently the spreading of the art in a credible fashion was more important than simply who had “license”. As I have been told there were both those in Hong Kong and around and others in other countries. He mostly wanted his “seal of approval” to distinguish one group in his favor from another. It was not that they could not teach, it was just the extra high “graduate” status accorded to the best. He had over 4000 students, since he was an instructor for the Ching Wu Association. Throughout his long teaching career, Wong published over forty volumes on the Northern Praying Mantis Kung Fu system. These would serve to be a guide for future generations of the Northern Praying Mantis system. Shifu Brendan Lai says that Master Wong Hon Fan wished to spread mantis and share as much of the art as he knew with the world freely. He felt that the best way to preserve the theories and techniques was to openly share them with everyone. In doing this he used the best medium available to him. Shifu Wong Hon Fun actually lamented not being able to complete the task of documenting the entirety of his corpus before his death. 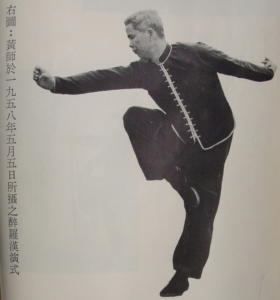 For those interested in Wong Hon Fun’s books here it is a detailed account of the publications:
There was once a series of books that were published only once for Huang Han Xun’s school in Hong Kong. Most of the fist and weapons form books of this series had a thin paperback cover that has sort of a green and white cover that shows a mantis. These are in a series that for all intent and purposes are no longer available. Additionally, there were two books on theories, another on healing / medical things Law Horn Gung (Qi Gong Breathing Exercises). This series did not have the “2nd and 3rd Second Route’s Essential” books, nor did it have Fei Yan Zhang (Wild Goose Flying Palm). These books were published later on. The more recent series that the Yih Mei Book company did, were a re-publishing of certain books out of the original series. Later they got contracted to do the other mentioned books (2nd and 3rd Essential and the Fei Yan Zhang form). These series books are out of print but sometimes they are still available in Chinatown bookstores. In addition to those books, there were two special books published for the Huang Han Xun clan (by his students and family) that include reprints from his original writing.: a) The 40th Year Commemorative Book (3 Advance Fist sets and the Drunken Dan Dao form)
b) The Shi Si Lu Book (Basically it has the 14 Rows form and some historical information, including about the history of the 14 rows. Mostly it’s in Chinese Language, but there’s a historical section that’s in English). Both of these are rare and very hard to find and actually the 14 roads book is even more rare than the 40th year Commemorative.