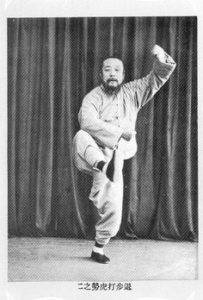 Wu Chien Chuan trained a portion of the palace guards for emperors in the Ching dynasty. After the resignation of the last emperor, Pu Yi, Master Wu was named the military instructor and martial arts counselor for the body guards of president Yi Yuan Hong in 1914.

Wu Chien Chuan did a lot to popularize the art of tai-chi chuan during the course of his life. A skilled rider and accomplished archer, he maintained a strong relationship with the members Yang school headed by Master Yang Lu Chan, who taught Tai-Chi Chuan to Wu Chien Chuan‘s father. Additionally, Wu Chien Chuan often practiced push hands with many masters, including Master Yang Cheng Fu.

Master Wu created the first academy for the Wu school of Tai-Chi Chuan in Shanghai in 1935 and named his son-in-law, Master Ma Yu Liang, vice president.

Today, the Wu school of Tai-Chi Chuan de Wu is the second most popular school in the world just after the Yang school. 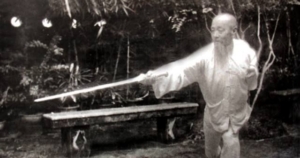 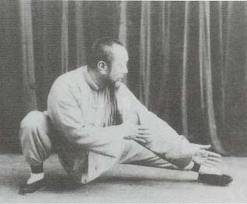 It is difficult to overstate the importance of Ma Yu Liang and his wife Wu Ying Hua the daughter of Wu Chien Chuan in the emergence of Wu-style Taijiquan after the Cultural Revolution in China. Even at an advanced age, Ma was chosen as one of the 100 Best Martial Artists in China. Wu Ying Hua and Ma continued to teach in Taijiquan until their deaths. They published several books on Wu-style Taijiquan. Ma and Wu Ying Hua’s Wu style sword/weapons book includes a family picture with several of their closest students. Ma Yu Liang also publicly practiced a number of formerly closed door (private or family secret) forms and methods so that they would not be lost. In public, Wu Ying Hua would often demonstrate the Wu style Slow Set and Ma would follow by demonstrating the Wu Style Tai Chi Fast Form. Ma taught many high level students, among whom was Fei Gua Ching who is still active in the Jianquan Taijiquan Association in Shanghai. Li Li-Qun is one of Grandmaster Ma’s oldest and closest living students. He was the deputy vice-secretary of the Jianquan Association (Chien Chuan Association) in Shanghai under masters Ma and his wife Wu Ying Hua. 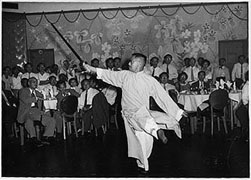