Zhang San Feng was a legendary Chinese Taoist purported to have achieved immortality. According to various accounts, he was born in Shaowu, Nanping, Fujian during the Southern Song dynasty and lived for over 200 years until the mid-Ming dynasty. His given name was Tong (通) and his courtesy name was Junbao(君寶). He specialized in Confucian and Taoist studies, scholarly and literary arts. During the reign of Emperor Shizu in the Yuan dynasty, he was nominated as a candidate to join the civil service and held office as the Magistrate of Boling County (博陵縣; around present-day Dingzhou, Baoding, Hebei). While touring around the mountainous regions near present-day Baoji, Shaanxi, he saw the summits of three mountains and decided to give himself the Taoist name “Sanfengzi” (三丰子), hence he also became known as “Zhang San Feng”.

Zhang San Feng’s life is that of indifference to fame and wealth. After declining to serve the government and giving away his property to his clan, he traveled around China and lived as an ascetic. He spent several years on Mount Hua before settling in the Wudang Mountains. Zhang created the soft fist and everything changed from that point in Martial Arts. From the beginning it was hard fist until he changed the world. Now we see Taiji, Hsing Yi and Baguazhang influenced from this very important master. Besides using his soft fist he went around China learning from some of the top masters and he started training Dim Mak or Death Touch. 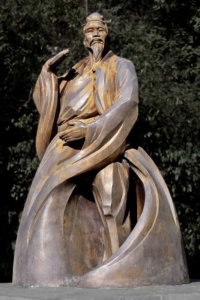 At the Shaolin Temple of Lomita and we teach the same principals as Master Zhang San Feng did and carry that tradition to here in the USA.