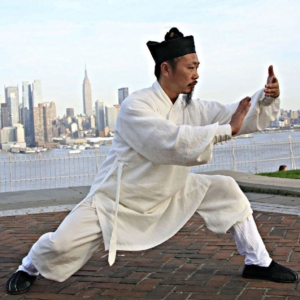 Zhong Yun Long, Head Taoist priest of Shihao style . He is considered as a disciple of the 14th generation of Wudang San Feng Kung Fu. When he was young, due to his keen interest in Kung Fu, he has been in Wudang Mount for along time.

GM Zhong was born in the year of the dragon in Huangxi City, Hubei. Many of my elders loved Kung Fu and that left a great impression on him. Although his father was a scholar who did not learn Kung Fu, his granduncle both inspired him and taught him a little. In the old countryside, fights often arose between clans, so everyone studied the martial arts. It was a required skill. So in the countryside where he was born, everyone loved Kung Fu and it was mandatory to study it. This was his inspiration, the city where he was raised. Everybody there loves Kung Fu, and for whatever reason everyone knew Kung Fu back then. That’s why he fell in love with Kung Fu too.”

“In 1978, when he was 13 years old, he began to formally study Kung Fu under a master named Tang Yun Yue in Jiangxi Rechang. Before that, he was exposed here and there, but he didn’t really learn a great deal. Under my first master, I studied Yue family boxing and Yang family boxing. That’s Yue as in the famous Song General Yue Fei, and Yang Kung Fu, not Yang Taiji. This Yang was another general from the Song Dynasty. According to legend, all the men in the family were generals that died in battle, so the women of the family had to become generals to defend the country against the Jin invasion. Anyway, he studied with that master for about six years, and then at 18, he went to Shaolin Temple to study for about six months.” 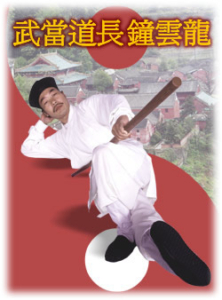 “At 19, he came to Wudang to study formally. Mostly, he studied under masters Guo Gaoyi and Zhu Chende. Wang Kuangde also taught me a lot. At that time, Wudang was not as open as it is today. Not everybody could go there to study. They had rigid restrictions on who could be accepted as students. Then, in 1984, the Wudang Taoist Association was founded and that began to open things up. Before that, only the older Taoist priests lived in the temples. Due to China’s turbulent recent history, there was a missing generation. All the masters from the last generation are very old. I am the part of the younger generation of priests to come in. It was the first time they recruited new blood for the Wudang Association and he was among the first recruits.” 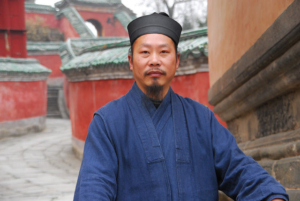 “In winter of 1985, the Wudang masters asked me to go down the mountain and spend three years to search for lost Wudang masters and schools. He first studied under Gansu Chen Ye and inherited WudangBashenmen (8 Immortal Gate.) In spring of 1986, he traveled to Lao Mountain in Shandong and studied Xuanmen Wuxue (dark gate martial study.) That autumn, he went to Zhongnan Mountain in Shaanxi to study Huan Yen Dan Ba (Taoist alchemy) under Gansu Li Yue. He continued his studies on Zhongnan Mountain through the spring of 1987, inheriting Wudang Xingyimen and Baguamen. Then in June he was ordered to return for the first Wudang open tournament.” 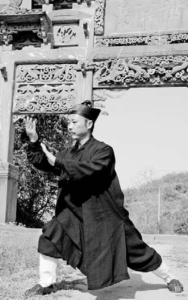 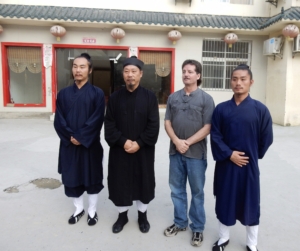 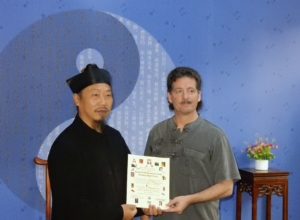 Grandmaster Zhong Yun Long was presented a certificate from the IMAF from Master Marquez in Wudang China. 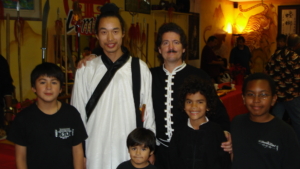