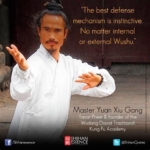 In 1994, Master Yuan was selected by the Wudang Taoist Association for Taoist Wushu Performance Team, and initiated into the Purple Heaven Palace, the largest Daoist temple at Wudang. With the blessing of the Chairman, Master Yuan joined the circle of Daoist culture. Since then, Master Yuan has furthered his practice of Daoist philosophy and internal gongfu.

As a member of the Taoist Wushu Performance Team, Master Yuan has traveled to various places in South East Asia to demonstrate Wudang gongfu. He has also represented Wudang when receiving high-level Government officials and celebrities from other countries in their visit to the Daoist mountain.

With the promotion by the Government of the Wudang special administrative region, more people from all over the world have embraced Daoism and Wudang mountain. Improving well-being and health through exercise is becoming popular worldwide. Foreigners are becoming more aware of the famous Wudang internal gongfu previosly known only to Chinese. Visitors from aboard are coming to here to explore Wudang internal gongfu.

Master Yuan has been responsible for teaching foreigners for years. Throughout these years, he has been dedicated to learning and improving his English for better communication with foreign learners.

In line with the slogan of the Government of the Wudang special administrative region: “Let the world know about Wudang”, Master Yuan established his own Wudang Daoist Traditional Kungfu Academy with the agreement of Master Zhong Yun Long. The mission of the academy is “To broaden the reach of Taoism and to train outstanding wushu experts”. The academy welcomes visitors from any part of the world. 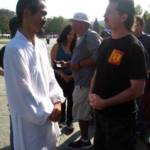